The man who saved the United Kingdom: Michael Moore

"The man who saved the United Kingdom" - it has been said that this title awaits Michael Moore if the Scottish people vote to stay in the UK in next year's Independence referendum. He has even been called "Westminster's answer to James Bond," by the Independent's John Rentoul, but the Secretary of State for Scotland is pragmatic:

"I would qualify that to say I'm part of the team to keep Scotland in the UK. I've never been one to look for the limelight." It's a team he is proud to be a part of. As Secretary of State for Scotland, Moore has overseen the implementation of the Scotland Act, while Charles Kennedy plays a key role in the cross-party Better Together campaign. George Lyon MEP is chair of Rural Better Together, a group made up of farmers and representatives from the food processing industry, and MPs, MSPs and activists are leading campaign efforts in their local areas.

Moore cites the Scotland Act, which gives substantial new tax and borrowing powers to the Scottish Parliament, as an important achievement. His original seat included parts of Midlothian, and he fondly remembers speaking in a Town Hall there in the late 1990s where Gladstone also used to appear. "They were slightly less auspicious circumstances for me," he admits, "but I think he'd be very pleased that we created the Scottish Parliament, and also that Liberals have been at the heart of gaining extra powers for people in Scotland. I think that would absolutely fit with what he argued in his philosophy over a hundred years ago."

Moore moved to Scotland from Northern Ireland as a small child when his army chaplain father was posted there. He grew up very aware of being both Scottish and from Northern Ireland. "I was very comfortable early on, being Scottish and British simultaneously. I've never needed a state, a country called Scotland, to help define my identity. I can be Scottish within the UK without any difficulty whatsoever." 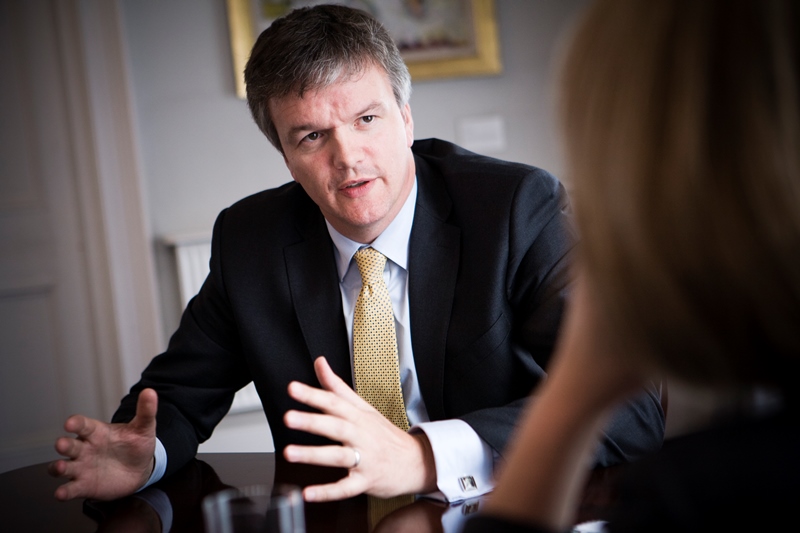 Moore says that this dual identity comes even more naturally to Scotland's 16 and 17-year-olds, who will, for the first time, have the chance to vote in the referendum. "The polling evidence currently suggests that 16 and 17-year-olds are more supportive of keeping the UK together than they are of becoming independent." He says that young people recognise a wider change beyond national boundaries, and instead take an international view. "They see a world that is more complicated than the one I grew up in 30 years ago: you can be Scottish, you can be British and - whisper it - you can even be European."

Scottish people of all ages, says Moore, "have the best of both worlds" with their own Parliament in Edinburgh, while working with the rest of the UK on other matters such as defence or foreign affairs. Scots, he says, benefit from being part of the UK "family" and points to last year's Olympics as evidence: "We were all delighted in Scotland to support Jessica Ennis, Mo Farah, and others from England, while we saw the rest of the country cheering Chris Hoy, Andy Murray and Katherine Grainger. There were Saltires alongside Union Jacks." He says that the identity and emotional side of the argument is a lot more nuanced than many might have assumed. "There's a complex fabric for all Scots to enjoy."

On a practical level, Moore says that the SNP will find it difficult to persuade Scots that their daily lives would be better in an independent country. "Take the currency, for example: people are wondering how their pensions would be paid and how their ISAs would work if the currency were to change. That's both an issue of identity and of how you live your everyday lives." He accuses the Scottish Government of "wishing away the difficulties" of spelling out practicalities like these, while they assert instead that little would change under independence.

"Scots don't buy it," he says. "Independence is a big, irreversible change and from similarities at the beginning, I think you'd very quickly find that shared interests become separate interests." He finds it a curious argument to go through all the "hassle" of independence just to keep things the same. "Why go to that enormous effort to negotiate all the things that you've already got, like membership of the European Union, keeping the pound, keeping membership of NATO?"

Moore insists that Scotland would be capable, if it had to, of making its own way in the world, ("I find it insulting whenever anyone suggests that would not be the case") but repeats his bifocal theme: "Families and communities deserve the best of both worlds: a strong Scottish Parliament and a strong voice at Westminster. That's the exciting vision that people in Scotland want."

He warns that Scottish businesses, which do a large proportion of their trade with England, would lose out under independence: "We've got a nation of five million people that gets full access to the market created by 60 million people as a whole. Now if you're a Scottish business, you've got no barriers to trading within the UK. It's similar to the single market in Europe, only we've got it in the UK, including the same employment laws and regulations. Why would you give up on that?"

Similarly, he says, renewable energy resources and the ability to exploit them should be shared. "Between Alistair Carmichael and John Thurso's constituencies in the far north of Scotland and the Northern Isles, you've got some truly amazing wind and wave energy that we're trying to tap into. But that renewables potential needs investment." Ed Davey's energy market reform agenda gives a UK-wide subsidy framework that underpins the Scottish renewable sector. So instead of five million consumers in Scotland having to bear the investment and subsidy costs of Scottish renewables, the whole of the UK shares both the costs and the benefits of that.

Politicians from Holyrood and Westminster agree that the referendum should be made in Scotland, so the Scottish Parliament decided the referendum question itself: "Should Scotland be an independent country?" Moore and his colleagues offered to the First Minister, to transfer the legal powers to hold the referendum. Although the SNP originally proposed to create a new body to oversee this, the Electoral Commission was brought in instead to test the original question which was, "Do you agree that Scotland should be an independent country?"

"Most of us thought that sounded pretty leading and biased, but we negotiated with the Scottish government and they accepted that the Electoral Commission should play its normal advisory role. So they went away and they tested and they came back with a better question." Moore is satisfied with the process and outcome so far, "Devolving has reaped dividends." Now with a year to go, he says, the No campaign's biggest enemy is complacency. He has seen a lot of interest in the pro-union campaign at street stalls in his constituency: "It's a good dialogue to be having with voters after what's been a pretty difficult two or three years for the party in Scotland." But despite an advantage in polling, he doesn't take any of those votes for granted.

"We're still in the foothills of this. I hope that the robust, orderly constructive debate over the last year is something that we can maintain. It will get tougher, particularly as we get closer to our date with destiny, but if both sides of the argument can stick to making their point constructively then at the other side of this debate we will be able to live with each other afterwards."

Both Moore and Nick Clegg are preparing their speeches for Federal Conference in Glasgow on 18 September, exactly a year away from the referendum date. Moore sees the Conference date as a big milestone en route to the referendum and will make the topic the centrepiece of his speech, "and it will certainly be a significant part of Nick's as well."

Federal Conference was last held in Glasgow in 1995, just after Moore was selected as the candidate for David Steel's seat. "I was completely new to campaigning and it was my first ever Conference," he remembers. "Things have moved on quite a bit because at that conference we were talking about the Scottish Parliament which we wanted to have, but there was no firm delivery of that yet. Now we've got it and we've developed its powers."

This time in Glasgow, Moore looks forward to the whole party engaging in the debate on Scotland's future. "I want to hear what colleagues from England and Wales and our friends in Northern Ireland have to say about this. Scots will vote on it, but it's a debate for the whole UK."