The big question and the great debate - IN or OUT? Nick v Nigel

With just one day to go until the first Nick v Nigel debate, the question of IN v OUT moves into sharp focus.

This morning, independent financial services body TheCityUK announced its latest forecast trading figures which show the importance of Britain remaining in the EU.

Figures published by TheCityUK reveal that the UK's trade surplus in financial services now stands at a record £61bn an increase of 10% since. The forecast also shows that £20bn of this trade is with other European member states making the EU the UK's largest single trading partner. 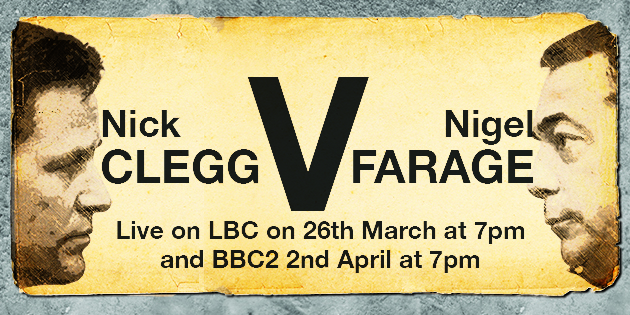 In addition to the economic benefits of Britain's membership in the EU, the research also highlights the importance of remaining in the EU to voters. Public opinion research into the electorate's view on Europe shows the public's decision on staying or leaving the EU will be most swayed by economic factors, in particular the creation of jobs.

Chief Executive of TheCityUK, Chris Cummings asserts: "Leaving the EU would create a risk that's bad for the economy and deeply worrying for those with the greatest share in the economy's long term success: today's young people."

Britain's place in the EU also receives support from Hugo Dixon who advocates the importance of remaining in the EU in his editorial in today's Independent.

Dixon argues that the case for remain IN the EU has never been stronger and writes:

" Our existing EU membership is valuable; we have a great chance to make it better; and all the alternatives are worse.

"Indeed, it would be a historic error to pull out. Our economy would suffer if we quit. Our global influence would also be diminished."

Dixon calls on pro-Europeans, pro-reformers to back Britain's membership in the EU for the sake of British interests and national influence.

From the economic benefits of Britain's membership, to the freedom of movement for citizens crossing the borders, Dixon covers a range of reasons, why Britain is better off IN.

Concluding that: "There are no good alternatives to membership. We should stay in the EU and put our energy into reforming it. We should fix it, not nix it," Dixon certainly gives us some food for thought and an apt prelude to what is set to be a very lively debate.

You can watch the debate live here, or by joining one of the many Nick v Nigel parties taking place across the country.