Lynne Featherstone: Last night we saw the nasty side of Nigel Farage

Personally, I thought Nick wiped the floor with Nigel Farage. He had the facts on his side and he articulated the kind of open, tolerant, modern attitude towards Britain and the world that makes me proud to be a Liberal Democrat.

Nigel Farage, on the other hand, showed his true colours. I expected him to be populist, to twist the facts and to blow his dog whistle on immigration. What I didn't expect was to hear him taking his talking points straight from the Kremlin.

When the subject of Ukraine came up, Nigel Farage's answer was "I agree with Vlad".

Nigel Farage loathes the EU so much that he is prepared to side with Vladimir Putin against the people of Ukraine and the democracies of the western world.

His statement, that the EU has "blood on its hands", was an insult to those pro-democracy demonstrators who bravely took to the streets of Kiev to fight for their rights in the face of oppression, some of whom gave their lives.

And just in case you thought that might be a slip up, here's UKIP's former leader Lord Pearson on the radio this morning: "Russia has been making it known for years that it couldn't, and can't, and won't tolerate the Crimea coming under the sphere of influence of the corrupt octopus in Brussels…I think Nigel Farage is right to point that out and the instigator of this crisis is in fact Brussels and not Russia." 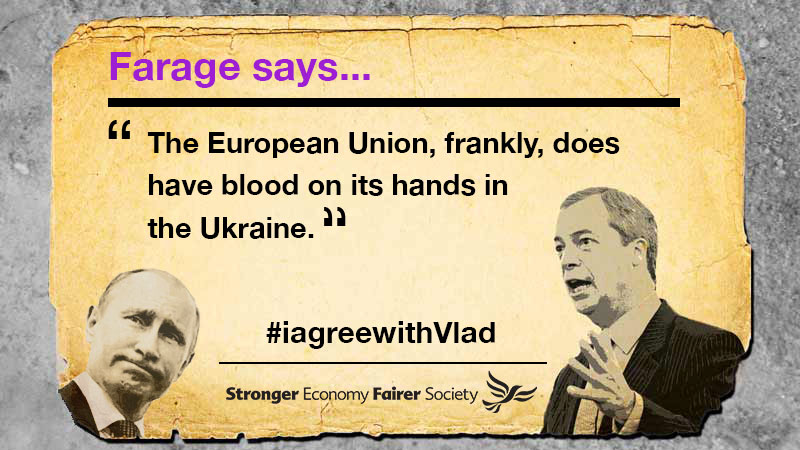 And it was not just ugly comments about "European imperialism". When same-sex marriage came up, Nigel Farage broke out in a sweat, opposed it and tried to find a way to blame the European courts. Contrast that with Nick, speaking openly and warmly about his pride that from this weekend gay couples will be allowed to marry: "It is just unalloyed great news that love and commitment is going to be recognised in marriage across the country regardless of your gender. It's a wonderful step forward."

Last night you saw a great contest and a clear contrast. This was not just about whether or not you think Britain is better off in or out of the European Union. This was about what sort of country we want to be. Do we want to be a modern, open, tolerant and diverse country that is co-operative with its neighbours and comfortable in the 21st century world, or do we want to be an isolated, divided and fearful country that is more comfortable in the company of bullies like Putin than people who are demonstrating for their freedom? I know which side I'm on. I agree with Nick.

Will you stand with Nick against Nigel Farage?