Today, the Government has announced their economic plan to build a stronger economy. These plans will help to create jobs and improve businesses by improving infrastructure.

More than 200 projects in rail, road, local transport, food defences, broadband, airport infrastructure and waste management are to start construction this year and next year. These projects could support 150,000 jobs across the country in construction and thousands more in other sectors following completion.

The projects include Mersey Gateway Bridge, Sheffield Lower Don Valley and Exeter floor defence schemes, and the A1 Barton to Leeming motorway upgrade, which will reduce journey times by 20%. 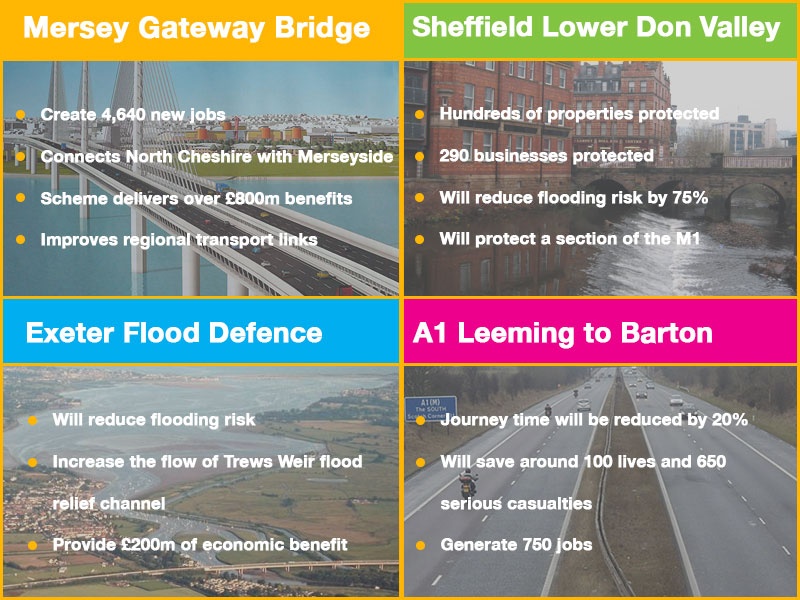 More than 200 infrastructure projects are also due to be completed this year, including major roads such as the M6 J10A-13, Nottingham tram extension, Heathrow Terminal 2 upgrade and Gwynt y Môr Offshore Wind Farm, which is currently the largest in construction anywhere in Europe.

The Government has also taken radical action to unlock and stimulate private sector investment, which is expected to make up the majority of UK infrastructure investment between now and the end of the decade. This has included setting out a plan to generate a wave of new investment in our energy infrastructure through the biggest change to the electricity market since privatisation, and the provision of up to £40 billion of support for critical infrastructure projects through the UK Guarantees Scheme.