Nick Clegg writes: Our plan is to finish the job and finish it fairly

"The election in May this year could mark the moment when, despite all the siren voices urging us to swerve Left or Right, we resolved, as a nation, to hold our nerve, hold our course and finish the job. 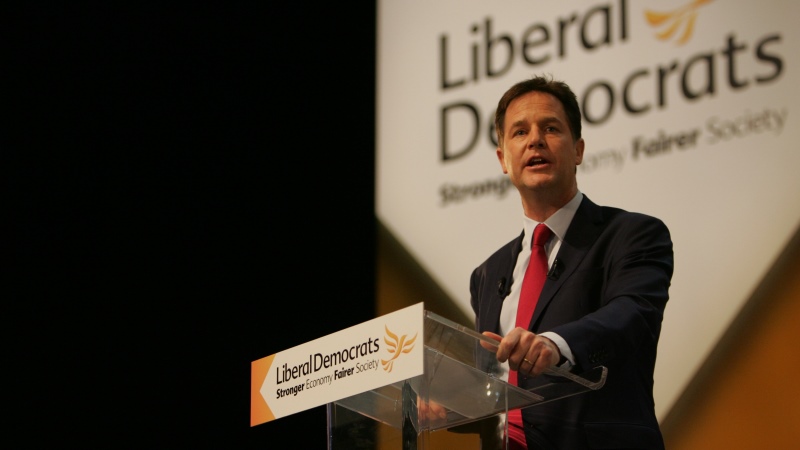 "But it could equally mark the point at which we lost our nerve and abandoned our course, just as our journey's end came into view.

"For make no mistake, a vote for either the Conservatives or Labour would put all the achievements of the last five years at risk.

"Labour's economic policy is built on denial and irresponsibility. Like an arsonist throwing rocks at the fire brigade, they have spent every day of the last four and a half years obstructing our efforts to put out the economic inferno that they lit. This is the party, let us not forget, that allowed the banks to crash the economy and which left Britain so vulnerable to that crash by racking up the biggest budget deficit in the developed world. And their answer this time? The same as last time: more and more borrowing, requiring us to pay billions more every year just on the interest on our debt - money that should be spent on schools, hospitals and front line public services.

"The Conservatives, meanwhile, are unveiling posters urging us to stay on "the road to a stronger economy". But look at their plans and you will realise they have no intention of staying on the road - they are planning to swerve to the Right, to a future of unending austerity. They have made a choice to remorselessly cut the money for public services even after the deficit has been eliminated, cuts that will be even deeper because of their £7 billion promise of unfunded tax cuts. And they have chosen to do all this without asking for a single penny more in tax from the very wealthy. That is not sticking to the plan. That is a new, ideologically-driven plan to shelter the very wealthy and impose unnecessary cuts to our public services.

"Our plan, by contrast, is to finish the job and finish it fairly. The Liberal Democrats will borrow less than Labour and cut less than the Conservatives. And because we are not planning to shrink the State like the Tories, or re-inflate the State like Labour, we won't have to cut as much, or spend as much on debt interest, as they will, meaning we can give the NHS and our schools the funding they need.

"That is what I mean when I say the Liberal Democrats will anchor any future coalition in the centre ground. We will stop the two old parties veering off to the extremes of Left and Right, urged on their way by the fringe parties, the nationalists and the populists - UKIP, the Greens, the SNP, Plaid and the rest.

"And at a time when nationalism and populism threaten to break the United Kingdom apart and cut us off from the world's biggest trading block, only the Liberal Democrats are making the case for a self-confident, outward looking Britain that that is 'open for business.

"That is why a vote for the Liberal Democrats this May is a vote for economic security against economic turmoil; for political stability against political uncertainty; and for the national interest against sectional self-interest."

You can read Nick's article in full here.