Protecting the funding for the Holocaust Education Trust

A Liberal Democrat government will protect funding for the Holocaust Education Trust's 'Lessons from Auschwitz' project for the next five years, Nick Clegg has announced today (Monday 12 January).

Nick said that he would ensure that any government including Liberal Democrats would allocate the funding so that the project, which is due to end this year will continue for another five years. 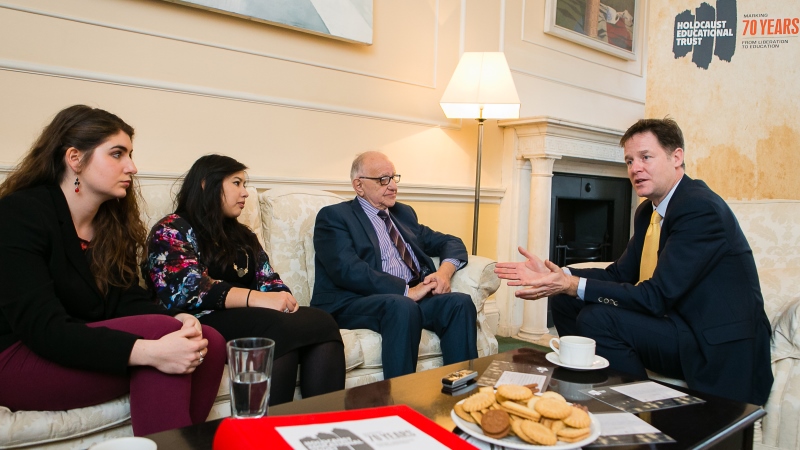 He is the first party leader to commit to safeguarding the funding and said the £9m budget over the five years is "worth every penny."

Lessons from Auschwitz' project means every school and college in the country has the opportunity to send two students aged 16 to 18 to see for themselves what they had only previously read about in books or seen on television. The programme includes a visit to Auschwitz and a seminar with Holocaust survivors.

The project is now in its 16th year and has so far enabled more than 25,000 students and teachers to visit Auschwitz-Birkenau. The new £9m funding until 2020 would provide for 14 projects and 3,000 students to take part in the trip, every year for the next five years.

"Holocaust survivors have bravely told their stories for many years.

"We cannot remember and re-remember their testimony enough. Because forgetfulness allows prejudice and hatred to rise again, as we can see from the atrocities still perpetrated today.

"The horrific events in Paris last week are a shocking reminder of what happens when warped ideologies and prejudice go unchecked.

"Remembering the Holocaust is not just a history lesson. It is one of the greatest antidotes we have to anti-Semitism and extremism of all kinds.

"Sadly there will be a time when there are no eyewitnesses left. This makes the work of the Holocaust Educational Trust even more important.

"The 'Lessons from Auschwitz' programme is the cornerstone of holocaust education in the UK and one of the best projects of its kind anywhere in the world.

"That is why the Liberal Democrats are absolutely clear in our commitment to funding this vital programme for the next five years. The £9m funding from the Department of Education is clearly worth every penny.

"The fact that thousands of young people will continue to go on these visits and be more aware of the horrors of the past is one of our greatest safeguards that they will not be repeated in the future."