Danny Alexander sets out an alternative economic plan for Britain

Liberal Democrat Chief Secretary to the Treasury Danny Alexander has set out the party's tax and spending plans for the next five years.

In a statement to the House of Commons, Danny announced that the Liberal Democrat fiscal plans designed to build a stronger economy and a fairer society, creating opportunity for everyone. 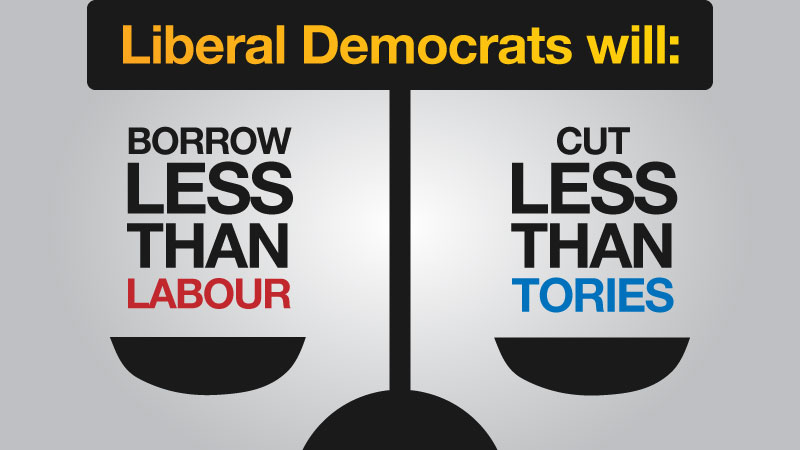 Danny outlined how the plans are based on the Liberal Democrat values of fairness and strength and how they will deliver on our commitment to balance the books fairly.

Our plans include borrowing less than Labour and cutting less than the Conservatives, keeping Britain on the path to prosperity.

The plan has been produced by the Treasury based on Danny's assumptions and using data from the Office for Budget Responsibility's forecast.

Finishing the job of economic recovery, which we started in 2010, requires £30bn of fiscal consolidation by 2017/18.

In order to do so we will ensure that those with the broadest shoulders bear the largest share.

The plans are are based on a further £6n from tax dodgers, and an additional £6bn of tax rises. We would ask those in high-vlaue properties and the banking sector to pay more, rather than ask those on low incomes to accept less.

This would leave around £12bn of departmental savings and the remaining £3.5bn from welfare savings. Those measures allow the structural deficit to be eliminated in 2017/18. It would actually meet the coalition's fiscal mandate with headroom of £7.7bn.

Once that mandate is met, we would then focus on cutting debt as a share of the economy.

We will increase public expenditure as the economy grows after 2017/18.

This means that there will be more money available for infrasture investment and public services, increasing to £25bn, then £36bn and then £40bn.

This money could be used to ensure that the NHS has the £8bn a year that it needs to secure its future.

It could also be used to protect the education budget from cradle to college.

Danny also announced a package of new measures to tackle tax evasion. These include:

- Introducing a new strict liability criminal offence for off shore evaders so that pleading ignorance can no longer be used in an attempt to avoid criminal prosecution.

- Introducing a new offence of corporate failure to prevent tax evasion or the facilitation of tax evasion. This would stop organisations from being able to get away with facilitating or abetting others to evade tax.

- Increasing financial penalties for offshore evaders - including, for the first time, linking the penalty to underlying assets. A billionaire evading £5m of tax won't just be liable for that £5m.

- Introducing new civil penalties so that those who help evaders will have to pay fines that match the size of the tax dodge they facilitate. So if you help someone evade £1m of tax, you risk a penalty of £1m or even more yourself.

- Extending the scope for HMRC to name and shame both evaders and those who enable evasion.