Labour have no credibility on the economy

Liberal Democrat Chief Secretary to the Treasury Danny Alexander has said that Labour have no credibility on the economy.

Responding to Ed Balls' announcement that he would rule out an increase in VAT, Danny said:

"Labour have no credibility on the economy. Ed Balls might be ruling out a rise in VAT but he can't rule out a rise in National Insurance and already plans to hike Corporation Tax. 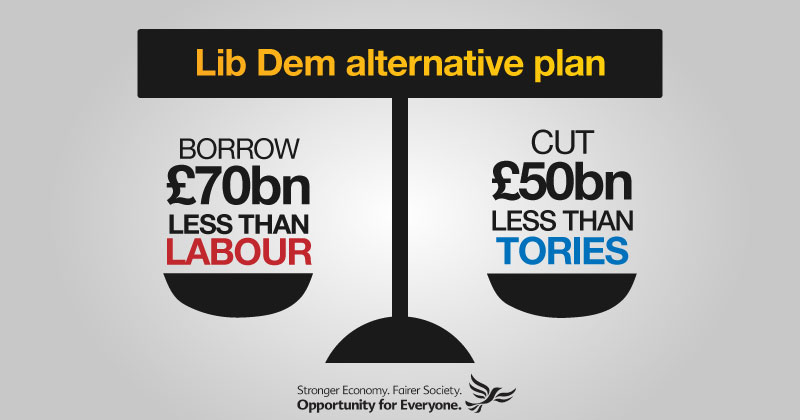 "Last time out Labour crashed the economy, increased taxes on jobs and raised taxes on the poorest by scrapping the 10p income tax rate.

"In contrast, we are restoring the economy to health and have strong growth with record employment. And we have a track record of cutting income tax for millions of working people.

"Because the Liberal Democrats have taken the difficult decisions to stick to a balanced recovery, under our future plans there is no need to raise income tax, national insurance, VAT or corporation tax.

"And in contrast to Labour, we have a clear, comprehensive vision for the future. We will finish the job of balancing the books by 2017/18, and will do so fairly.

"We will borrow less than Labour and cut less than the Tories. And once the books are balanced, our country can turn the corner and we can continue to invest in our public services, borrow sensibly for productive infrastructure projects and get our national debt down to sustainable levels."

Our plans for the next Parliament include finishing the job of balancing the books by 2017/18 through a mix of tax rises and spending cuts, ensuring that the job is finished fairly.

This balanced approach means the Liberal Democrats can protect vital public services like schools and hospitals while also looking after the most vulnerable in our society.

Our plans do not require any increase in the headline rates of taxation - Income Tax; National Insurance; VAT; or Corporation Tax.

The Liberal Democrat approach to balancing the books fairly means that by 2019/20 we will have cut £50bn less from public spending than the Tories and borrowed £70bn less than Labour.