Labour aren't interested in standing up to the Tories

"If Labour aren't interested in standing up to the Tories and providing a credible opposition that's their funeral. 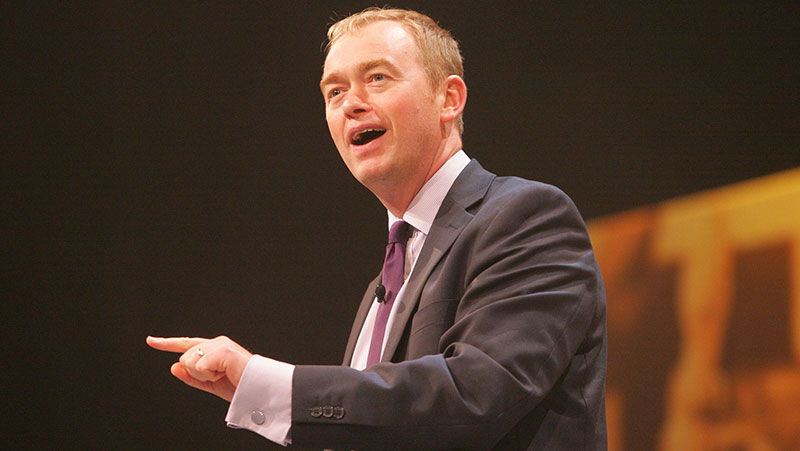 "The Liberal Democrats will fill that space. Radical and liberal and responsible too. When the tectonic plates of politics move, they sometimes move immensely quickly - that is what is happening now.

"These are momentous and historic times, history calls us, we will answer that call. Britain needs a party that is progressive, moderate and liberal. We are that party. This is our moment."

The full transcript of Tim's rally speech is below:

Last Wednesday, was the 29th anniversary of me joining the party when I was 16. I never ever thought I'd end up leading that party. Its an extraordinary honour.

Thank you, thank you so much.

Like many of us I often find myself harking back to that time - my formative, teenage years. It was the 1980s: The Smiths and The Clash, The Young Ones - and, of course, Margaret Thatcher.

I'd been brought up on Blue Peter appeals which - while good and worthy - attached no blame to anyone for the tragedies they raised money to alleviate.

But then came Live Aid. It was the first time anyone had suggested to me that poverty, disease and starvation were actually the result of bad politics rather than just 'unfortunate'. And I began to question what was happening in politics around me.

I gave a couple of quid to the Live Aid appeal, I added a Greenpeace membership card to the one I already had for Shelter and, when I went to sixth form college, I joined the Liberal Party.

I remember it now: It was September 16th 1986, the Communards were number 1, Blackburn Rovers were 12th in division 2 (a position we can currently only dream of) and at the societies fair, a certain Tim Pickstone signed me up for £1.50.
£1.50 was a big deal then, it could have brought me two pints instead… except I was 16 so obviously I wouldn't have done that…

I remember going on endless marches: in support of the miners, against the poll tax, in defence of student grants.

I even remember some of the old chants:

What do we want? Slightly higher grants

When do we want them? As soon as fiscally responsible

We Liberal students were at the cutting edge, I have to tell you.

It was massive fun and it led to … defeat and failure!

All that great energy, that sound and fury, signifying… nothing.

We had no power and no one was listening.

It made us FEEL very good but we didn't DO any good.

When I think back to the 1980s and I compare that time with the last five years I wouldn't swap them for the world. I want the Lib Dems to have power, power to change lives for the better.

Power was difficult, but our job is not to make life easy for ourselves it is to make life better for Britain.

For five years we made Britain better and the proof is seen every day as the unshackled Tories make Britain poorer.

Stand tall and know that we did much more than hold office, we made a difference and I am utterly determined that we shall do so again.

So in the words of Midge Ure, no regrets.

But since May things have changed.

Those last five years were difficult for us. But not as difficult as the last five months have been for others.

Difficult if you are under 25 and face losing housing benefit;

Difficult if you are a working mum set to lose a thousand pounds a year because George Osborne has sneakily cut your income;

Difficult if you run a solar energy firm as your staff face unemployment because Mr Cameron decided to ditch the 'green crap'.

A couple of weekends ago I took part in the Grasmere Guides Race. Just to be clear that's not girl guides - 'guides' is what we call shepherds in Westmorland so it's a fell-race. Its only about two miles in length but it's a bit over a thousand feet up. The winner does it in 13 minutes. It took me 19 minutes… just to get to the top.

Anyway, I got to the top of Butter Crag, which is about half way and one of the marshalls decided to let me know that I was in 130th place.

Then, just to rub it in, he added: "still, there's eight behind you, which in your job is one more than normal."

Anyhow, you get an astonishing view from the top of Butter Crag. When I look down into Grasmere itself I can see handful of the thousand or so of the affordable homes that we have managed to build across my constituency.

In fact the homes we have been able to build have kept the wheels of our local economy moving and without them it would probably have been a very different story.

But it's not enough.

I don't want just to be able to change lives for the better in South Lakeland - or Bedford or Watford or Eastleigh - or any of the other areas of the country where Liberal Democrats hold power.

I want to be able to change lives for the better the length and breadth of this country.

Some of what Mrs Thatcher did then was undoubtedly necessary. She was very good at tearing things down - the over-wielding power of the union bosses, old fashioned industrial practices stuck in the past, public sector monoliths removed from the people they served.

But she created mass unemployment, dismantled our manufacturing base de-skilling a generation, treated Scotland, the North, the West country and Wales as second class places and sowed the seeds of division and separation.

I observe today, interesting developments in the Labour party, who seem to be suffering a collective bout of nostalgia for those times.

They remember the camaraderie of belonging to a crowd of zealous, committed, energetic people.

The excitement of the picket line, the thrill of the protest march - with a breathtaking soundtrack to back it all up

You just need to look at my record collection for proof that I was there.

The 80s was an exciting time in politics, particularly for those on the progressive side of things.

But then I also remember that there wasn't a single minute in the whole of the 1980s when the Tories were not in power.

I am nostalgic for my youth but I am not nostalgic for those Labour economic policies which created the space for Margaret Thatcher to win in the first place and which kept her in power for a decade.

When progressives choose to feel good at the expense of doing good, they let down the people who need them the most.

Look at what the Tories are doing:

Forcing housing associations to sell off the affordable homes we so desperately need to put roofs over the heads of those on the waiting list, and to keep the economy moving.

Opting out of their responsibilities for the refugees made homeless in part by the illegal Iraq war that they themselves voted for.

And taking us to the brink of exiting the EU, just at the time when the need for collective international action has never been plainer.

So if Labour aren't interested in standing up to the Tories and providing a credible opposition that's their funeral.

The Liberal Democrats will fill that space. Radical and liberal and responsible too.

When the tectonic plates of politics move, they sometimes move immensely quickly - that is what is happening now.

These are momentous and historic times, history calls us, we will answer that call.

Britain needs a party that is progressive, moderate and liberal. We are that party. This is our moment.

It wasn't until the 1990s that I met Rosie, and not until the turn of the century that she became my wife.

Incidentally, this is Rosie's first conference - she has previously decided she had better things to do with her time.

'Why would I want to come to conference with you?' she'd say. You'll only spend all night with your mates wearing your Blackburn shirt and drinking beer'.

Which, as you all know, is gross misrepresentation of the way I have spent the last 50 conferences…

Anyhow, on Christmas Eve 1998 I asked her to marry me.

The previous day, I had presumptuously scraped together all the money I had left (which was a paltry £19!) and bought an engagement ring.

I've offered to upgrade it several times since, but Rosie loves the fact that it cost me 'everything I had'!!!

It's a true story, and though I say so myself, it's a lovely one and therefore its only right that I should completely spoil it by using it to crow bar in a political point… You see, I spent everything I had… but no more!

I did it with passion and 100% commitment and I went for it… and she said yes.

And that is what Britain needs us to do now - to bring responsibility and passion to our politics.

See what I did there? Seamless!

The need for a credible opposition has never been more obvious. And make no mistake, Labour has left the playing field, which means that only we can provide it.

Now, the Westminster machine won't always help us out - I'm only going to get a question at PMQs every few weeks now.

But I've thought of a way round it, I'm going to write to Jeremy.

'Next Mr Speaker, I have a letter from Tim from Cumbria who wants to know about land value taxation.'

But we will make our mark in Westminster and in Holyrood, the National Assembly in Wales, the London Assembly and the European parliament - we have dozens of Parliamentarians who will stand up for decency, liberalism and common sense.

We have hundreds of councillors working harder than ever to make to make a difference to the lives of the people around them, protecting schools and hospitals, promoting local transport and services.

And our growing strength lies throughout our country. With 20,000 new members. By their simple act of joining us they proclaim that fear and division will not win, that liberalism can and must win.

The first fruits of those millions of people in Britain who know in their hearts they are liberal and have stepped up to the mark to become Liberal Democrats.

Britain is teeming with liberals, most of them are not yet in the Liberal Democrats.

Some of them, are in other parties.

But we are their home.

We once again see the prospect of a decade or more of Tory rule, and it fills us with dread.

So we have no right to sit in a comfort zone:

every family whose home is at risk because the Tories undermine the recovery that we built;

every desperate refugee turned back at the port;

every business facing ruin if we leave the EU,

every one of them is depending on us.

We are liberals, we correctly talk a lot about rights, but tonight we have a duty. Our duty is to claim the mantle of the credible progressive alternative to the Tories.

We accept that duty. I am fed up losing…lets win again

The full transcript of Tim's rally speech is below:
Footer.