A couple of weeks ago, in Kidlington near Oxford, I met a guy called Malcolm. I say met…he came up to me in the street and started shouting at me.

You might have seen it on the news. Or the internet.

In the end we actually got along. But he was angry with me for not getting behind Theresa May and backing Brexit. I think I calmed him down a bit when we spoke, but I don't think I changed his mind.

And that's fine. You see, when last year's referendum took place I campaigned harder than anyone else to remain. I believed passionately that our children would have a brighter future if Britain remained in the European Union.

But we lost - and I accept that.

But that doesn't mean I have changed what I believe.

I believe that our children will have a brighter future if we are inside the European Union. That they will be safer and better off. That our economy will be stronger and our country will have more influence in the world. 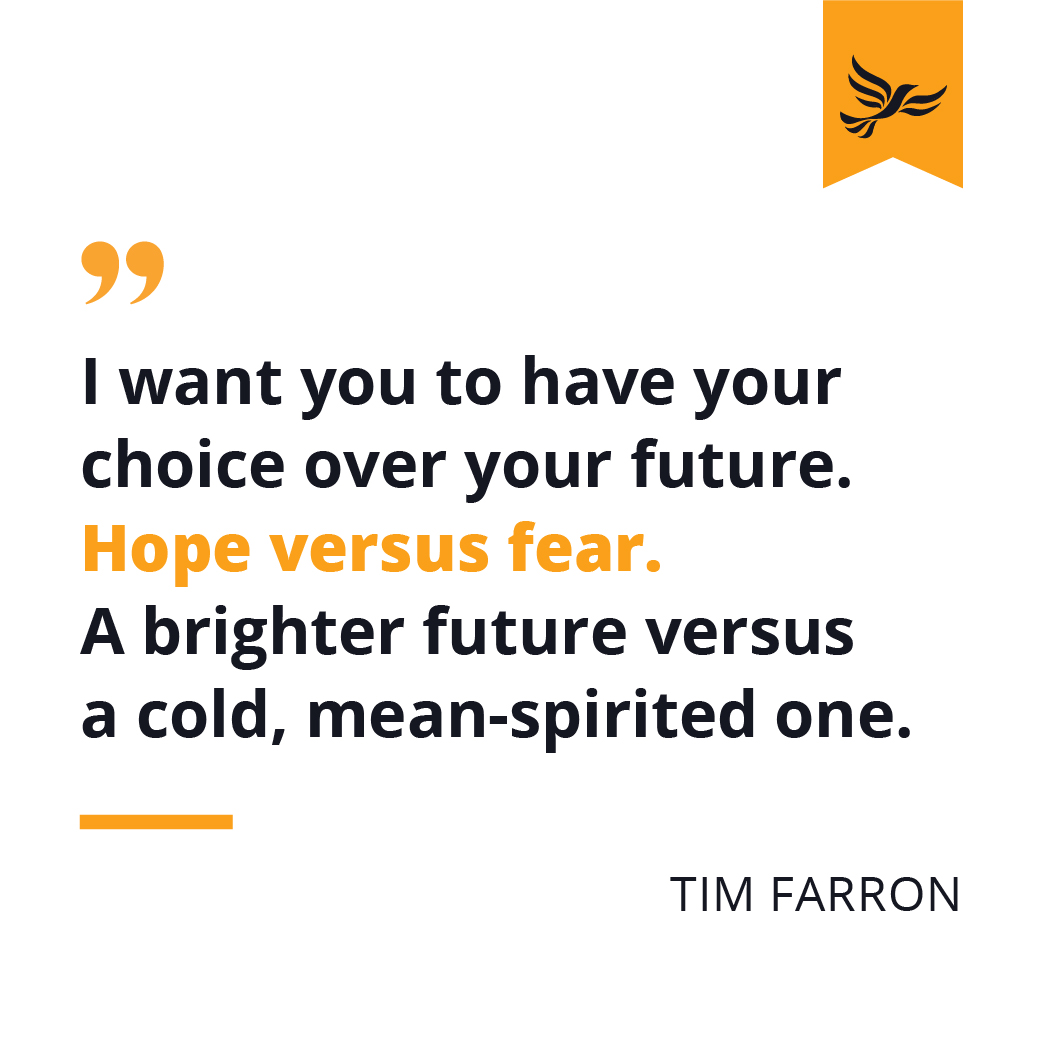 But just because I believe that doesn't mean I think people who voted to leave are bad people. Of course they're not. We just disagree.

Friends of mine did. Members of my family did. They don't all admit that to my face, but I know they did.

Those people, they're my people. I like them. They're good people. Decent people.

And, as it happens, I liked Malcolm too. Once he stopped shouting at me.

But here's the difference between me and Theresa May - I want Malcolm, and everyone in Preston, and every single one of you, to have your say over what comes next.

The choices Theresa May will make will affect your life and our country for decades - your job, your weekly shop, your environment, your safety, where you can travel to and where you can live.

And she's already making choices that will affect those things, including the most profound choice she could make - taking Britain out of the Single Market.

That decision alone is a time bomb under our economy. And when it blows up it is going to take our NHS and our schools down with it.

It is going to wreck our children's future for decades to come.

And it is a choice. Plain and simple. It wasn't inevitable. 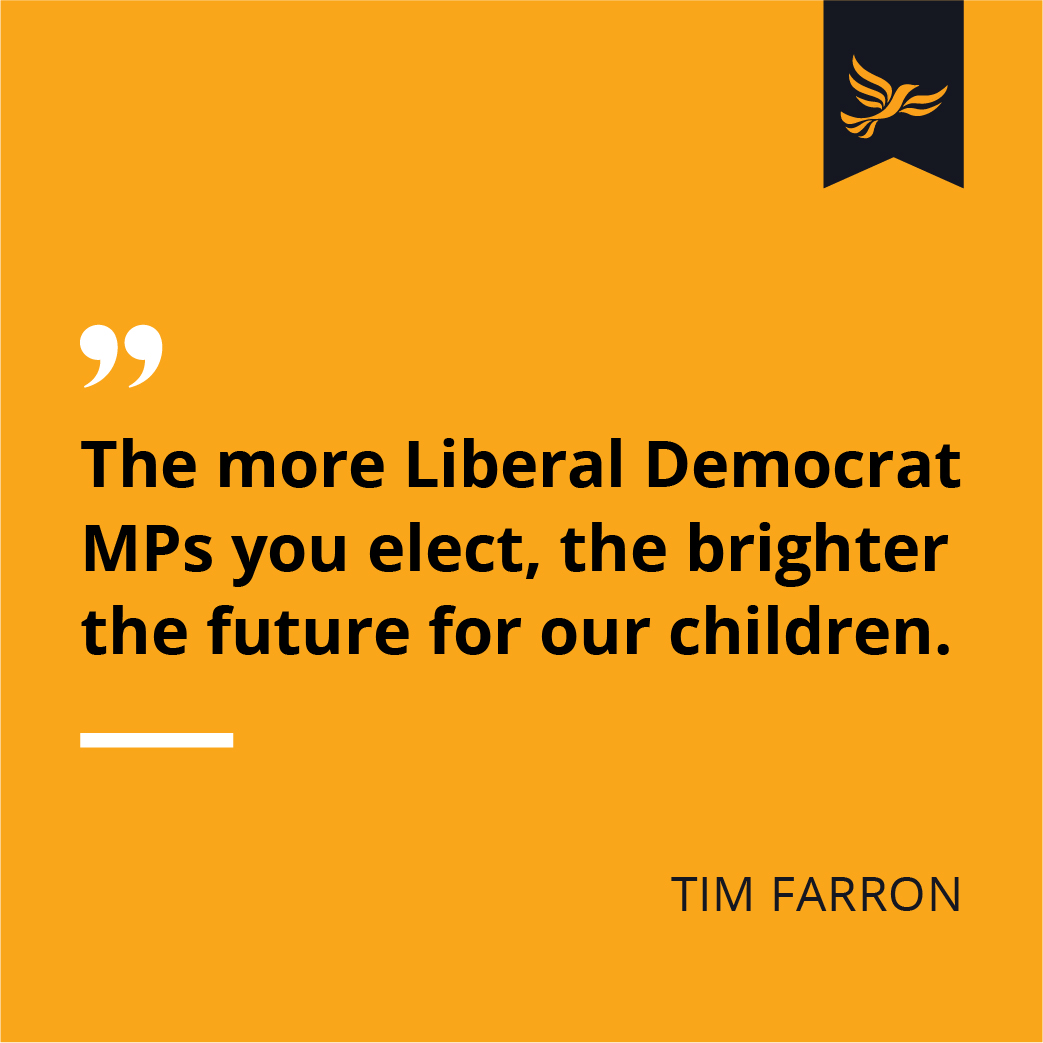 There was nothing on the ballot paper last June that said we were choosing to pull out of the Single Market. There are other countries that are outside the EU but inside the Single Market - just look at Norway or Switzerland.

There was nothing on the ballot paper that said that people and families from Europe who have made this country their home would be left in limbo, not knowing if they can stay in the country they raise their kids in.

And there was definitely nothing on the ballot paper that said we would turn our allies into enemies. Yet here we are, with our government making accusations of our neighbours and even threatening war with Spain.

The choices Theresa May makes - and the compromises she negotiates with bureaucrats in Brussels - will affect our children's future for decades to come.

My children, your children, Malcolm's grandchildren.

In June last year we voted for a departure, but we didn't vote for a destination.

So I want you to have your choice over your future.

Someone is going to have the final say over the Brexit deal.

I believe it should be the people.

You should have the final say on whether Theresa May's Brexit deal is right for you and your family in a referendum.

And if you don't like that deal, you should have the choice to remain in the European Union.

Giving you the choice over your future is exactly what our manifesto is about.

I want you to imagine a brighter future.

Imagine a future where our children can grow up in a country where people are decent to each other.

Where we have good schools and hospitals.

Where we take the challenge of climate change seriously.

Where give our teachers and nurses and soldiers the pay rise they deserve for the service they give our country.

Where we have an open, innovative economy. 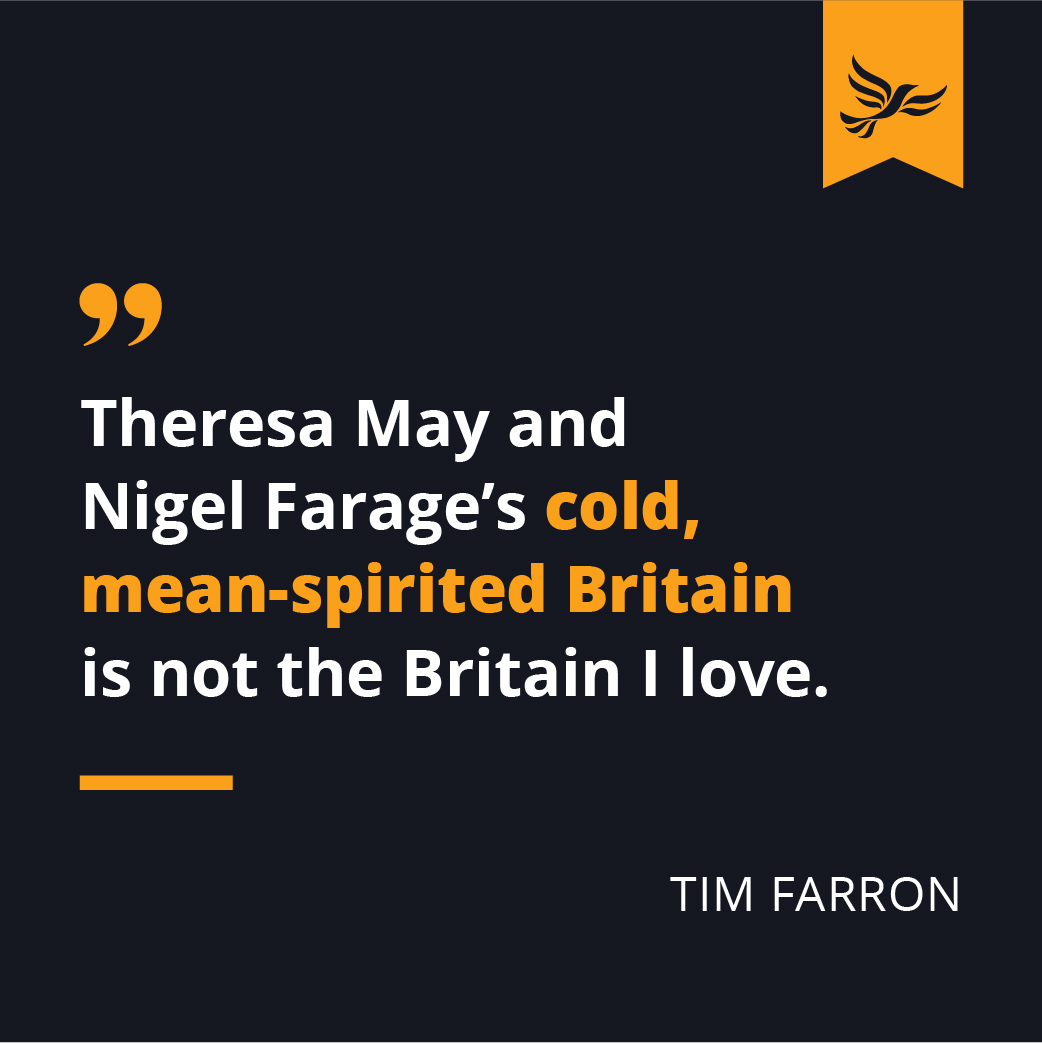 Where we treat the poorest and the most vulnerable with compassion.

Where we don't turn our back on desperate refugees.

But that's not the future Theresa May is offering you. If you want to know the most revealing thing that has been said during this election, look at Nigel Farage's Twitter.

He wrote: "Theresa May is using the exact words and phrases I've been using for twenty years."

Think about that for a minute. The 'exact words and phrases'.

The Prime Minister of our great country saying the same things that Nigel Farage has been saying for twenty years.

And not just the words and phrases. The policies too, that's what UKIP MEP Patrick O'Flynn said this week.

Brexit never did just mean Brexit. For Nigel Farage, Brexit was always part of a package, a world view.

It's a world view that includes shunning climate change…

…that includes shrinking the state by starving our schools and our NHS of the funding they need.

…that includes turning our backs on some of the poorest and most vulnerable people in the world, as Theresa May did when she shamefully closed the door to desperate child refugees.

Nigel Farage's vision for Britain is now Theresa May's. He has taken over the Conservative Party.

No wonder UKIP is standing down candidates and backing the Tories.

After all, who needs UKIP if the Government is doing what they want anyway.

Somebody has to stand up to them. Someone has to fight for the decent, compassionate Britain we love.

But it won't be Jeremy Corbyn.

On the biggest issue facing us all in a generation, when all this is at stake, Jeremy Corbyn's Labour hasn't shown up.

Jeremy Corbyn even ordered his MPs and Peers to vote with the Tories and UKIP.

Not against them. With them.

Before the vote on Article 50, he said he would order his party to vote in favour even if the Government made no concessions to them whatsoever.

So, surprise surprise, they didn't.

Jeremy Corbyn didn't have to do that. He could have voted with us to stay in the Single Market, or to give European citizens living here the right to stay. He chose not to.

Jeremy Corbyn has always been pro-Brexit - he campaigned against Europe for years - so we shouldn't be surprised. But we should be disappointed.

Labour are supposed to be the opposition, but they haven't opposed anything.

They are supposed to stand up for working people, but they haven't stood up for anyone.

They are supposed to care about our children's future, but they are letting the Conservatives wreck it.

They have lost the right to call themselves the opposition.

Labour has lost its purpose but we have found ours. 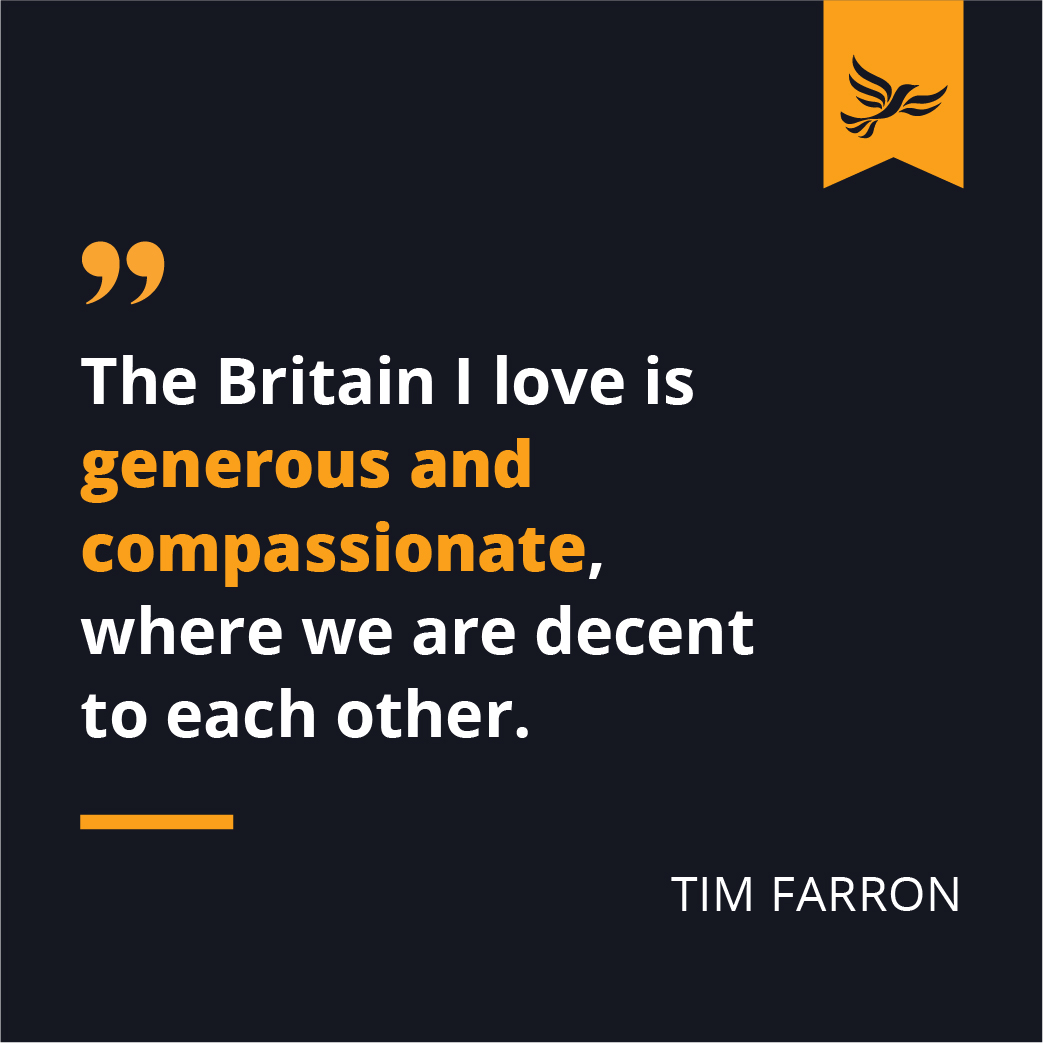 This is about the future of the open, tolerant, united country we love.

I am here tonight to tell you that we won't roll over.

A few weeks ago in France, the two parties that had run the country for decades came third and fifth in the election.

The decent people of France decided that they did not want to just simply accept one of the two tired old parties. So they rejected them.

And when the two old parties had been eliminated, the decent people of France faced a stark choice: a liberal, pro-European candidate who believes in an open, tolerant and united France, and the leader of the National Front.

Hope versus fear. A brighter future versus a cold, mean-spirited one.

Nigel Farage pinned his colours to the mast. Just like when he backed Donald Trump in America, he backed the candidate who represented his world view - anti-Europe, anti-refugees.

He backed the National Front.

Well, the decent people of France chose hope over fear. And the National Front lost.

Don't let anyone tell you the only choice you have in this election is between Theresa May and Jeremy Corbyn.

This election is about your choice and your future.

…where we have a clean environment and an innovative economy.

The more Liberal Democrat MPs you elect, the better the deal we will get on Europe.

The more Liberal Democrat MPs you elect, the more jobs and more money for the NHS and schools.

The more Liberal Democrat MPs you elect, the brighter the future for our children.

Theresa May and Nigel Farage's cold, mean-spirited Britain is not the Britain I love.

The Britain I love is generous and compassionate.

The Britain I love is one where we are decent to each other.

The Britain I love is open, tolerant and united.

If that is the Britain you love too then this is the moment to stand up.

This is your chance to change Britain's future.

I am here tonight because when my children are my age I want to be able to look them in the eye and tell them honestly that when the moment came to stand up for their future, I stood up.

I am determined that our children will grow up in a country where people are decent to each other.

I am here tonight because the Britain I love is not lost yet.

That's the country I want to lead.