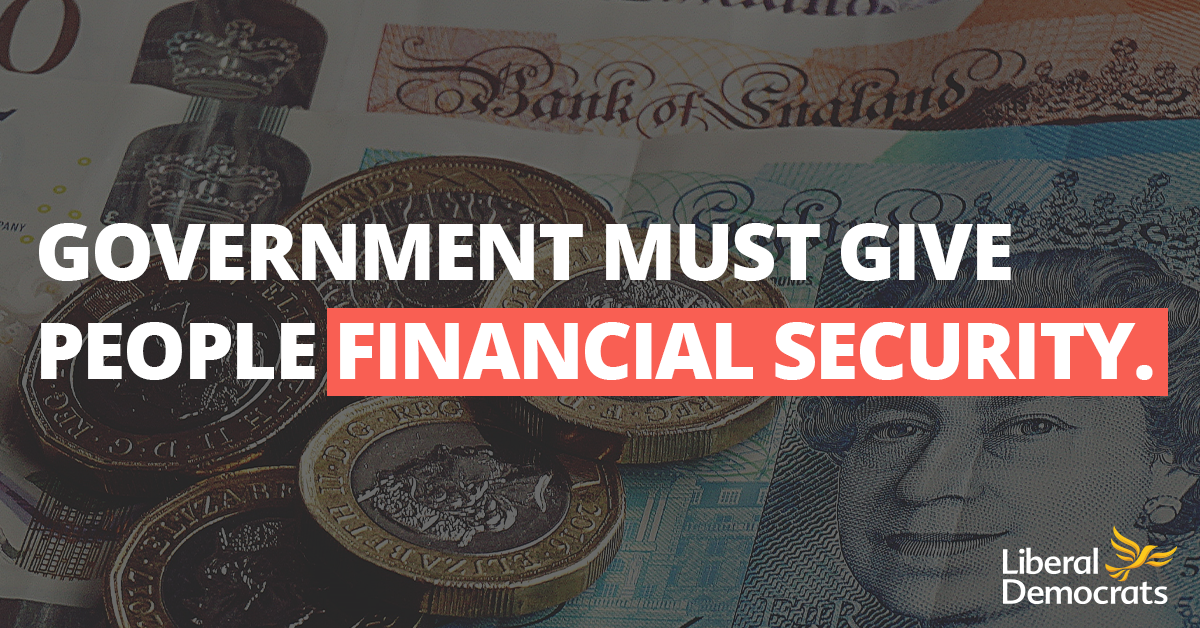 Responding to the Prime Minister's most recent update on the coronavirus, Acting Leader of the Liberal Democrats Ed Davey said:

"People cannot wait any longer for news about what they will have to live on if they lose their jobs. Few businesses are in a position to "stand by their workers" when their income stream has collapsed. This is about putting food on the table."

The government must act now to prevent people falling into destitution. We need to see grants immediately for struggling small businesses before they are forced to lay off staff. And we need bold Government action subsiding workers' salaries before we see tens of thousands of job losses.

These are difficult and uncertain times. We are calling on government to act now to give people financial security.

Liberal Democrats want to make sure that everyone gets the help they need as soon as possible throughout this #covid19UK crisis.

That's why @EdwardJDavey has called on the government for 4⃣ further financial support measures to help those who are particularly vulnerable. pic.twitter.com/ngCLTBOGJF 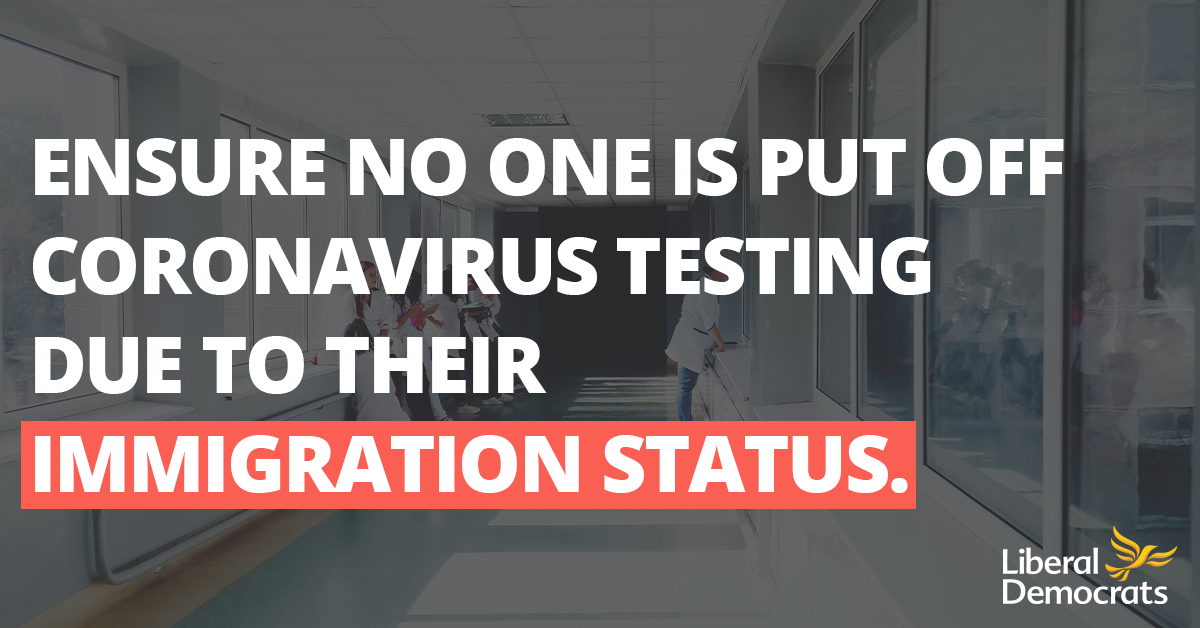 Yesterday we called on the government to guarantee that no data will be passed from the NHS to the Home Office during the coronavirus crisis for the sake of public health.

Speaking in the House of Commons yesterday, Wendy Chamberlain MP called on the Home Secretary to make sure that "no one who needs to be tested in relation to Covid 19, or indeed seek treatment, is put off by uncertainty over their immigration status".

Under the hostile environment, there is a real risk that people who find themselves gravely ill with Covid-19 will be too scared to seek treatment in case it leads to questions about their right to live in the UK. This fear risks putting people off going to hospital for testing, which in turn may lead to greater transmission in the wider community.

"No one should be put off being tested due to uncertainty over their immigration status"-@wendychambLDhttps://t.co/WmpeP2zgTK

The Home Secretary's failure to provide immediate clarity here is deeply troubling. This is purely about what is in the interest of public health, rather than any wider ideology about immigration.

We have urged the government to urgently make clear that, regardless of your immigration status, if you are seriously ill, go to a hospital. That is the only way to effectively provide life-saving treatment to the most unwell, and to limit the prospect of people transmitting this virus to others.

EU citizens must have automatic right to stay, as Settled Status refusals soar 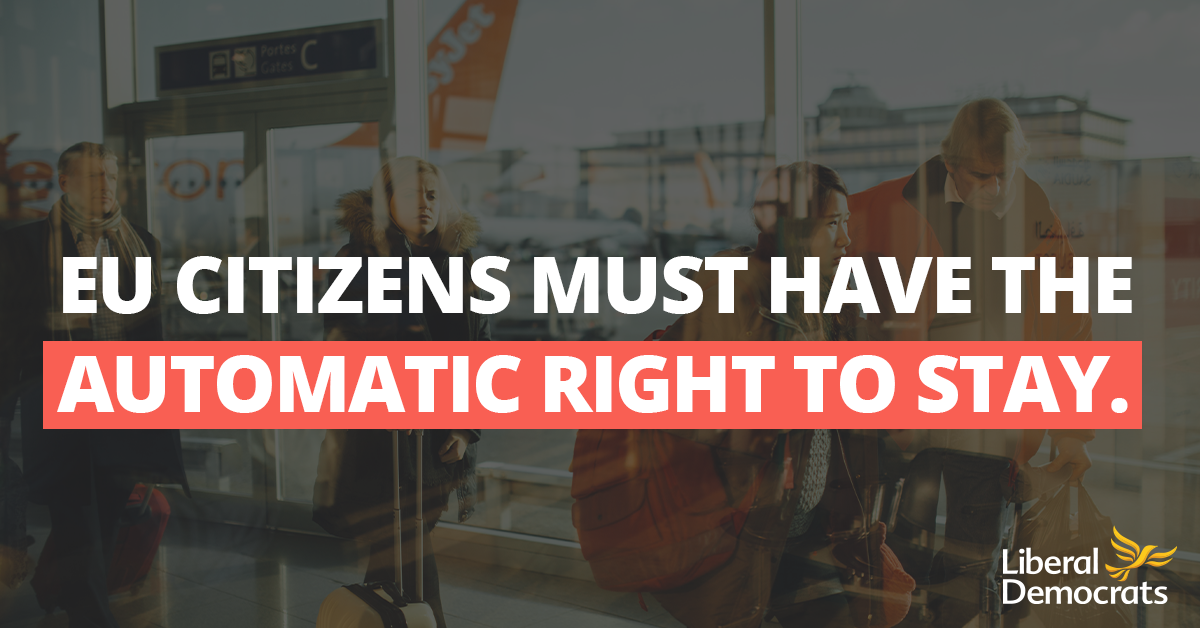 We are calling for EU citizens to be given the automatic right to stay in the UK, as new official figures show the number of people refused Settled Status soaring last month.

Yesterday Christine Jardine MP urged the Government to back the Private Members' Bill she tabled last month that would guarantee the rights of EU citizens in the UK.

The Home Office statistics, published today, show that 300 applications were refused in February, after a total of only 7 refusals in the scheme up to the end of January.

They also show that just 1.7 million of the estimated 3.6 million EU citizens in the UK have been granted Settled Status so far. A further 1.2 million have only been given the temporary "Pre-Settled Status", which forces them to reapply within 5 years. Meanwhile, there is a backlog of 345,000 applications waiting for a decision.

Even before the #CoronaCrisis, Liberal Democrats warned that tens of thousands of EU citizens will be left without Settled Status when the government's arbitrary deadline hits next year.

It will be a new Windrush Scandal on an even bigger scale.https://t.co/jasOUeAYcj

EU citizens in the UK have been living under a cloud of uncertainty for far too long. They are our families and friends, our colleagues and carers. They must have the right to stay.

Even before the coronavirus crisis, we were warning that tens of thousands of EU citizens will be left without Settled Status when the Conservative Government's arbitrary deadline hits next year.

That would leave thousands of people effectively undocumented and at risk of eviction, detention and even deportation. It will be a new Windrush Scandal on an even bigger scale.

We will keep fighting for the rights of EU citizens. The Government should back our Bill to give them the automatic right to stay in the UK, as Boris Johnson has repeatedly promised.